Hello guys,
In this tutorial, we are going to see how to make a logo of OpenCV. Before starting I would like you to try to make logo yourself. You can make logo of some other things like brands or anthing you like.

Line 7 : Specify the font as hershey_simplex. You can try other fonts too here 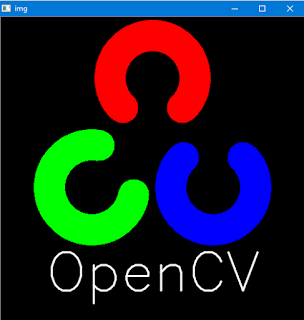 For any queries, Please ask in comment section below.
Posted by Unknown at 08:18:00 2 comments:

Hello guys,
In this tutorial, we are going to see how can we actually write a text like this one below on a canvas(drawing window). 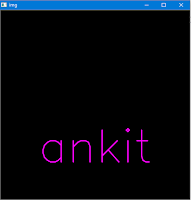 Line1-2: import necessary packages(see previous tutorials for info on them)

Line 5: puttext() is the function that takes in various parameters as follows:
1) canvas
2) String which you want to draw
3) starting co-ordinate of the string
4) font type which we stored in variable font
5) font size
6) color
7) thickness of font(dont confuse with size)
8) line type(click to know more)

Line 7-8: Hold the screen using waitKey(0) and exit all windows after the canvas is closed 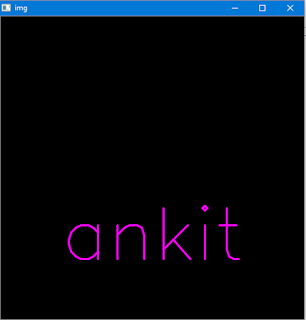 That's it for this tutorial. See you in next tutorial which is going to be little interesting.

Any queries, please ask in the comment section below.

In this tutorial, we are going to see how to make a simple poker face ( Something like this → `_`). 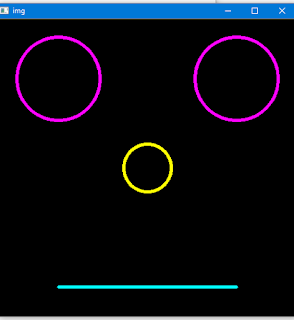 This will be generated when you run the code.

That's it for this tutorial. In the next tutorial, we are going to perform some operations on image.

In this tutorial, we are going to see how can we draw a circle using Python, OpenCV and Numpy. 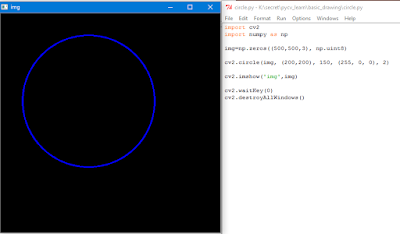 So that's it for this tutorial. Hope you are learning to use OpenCV with Python and Numpy. See you in my next tutorial where we will learn to draw more complex drawings which will involve use of both circle and line.

Any queries , please ask in comments section below. :)
Posted by Unknown at 06:23:00 No comments:

In this tutorial, We are going to see how to draw a line using OpenCV, Python and Numpy.

Today we will learn to use two new functions:
So let's start:


It is used to create an empty black image of specified size(Row x Col). We need a surface to                draw lines, circle etc. and this function provides us that surface by creating an empty black                  surface where we can make drawings.
Line 4: This is the code which actually draws a line on the black surface we made in previous line.
The syntax is:

Line 6: To hold the screen infinitely we pass the argument to waitKey as 0.

Line 7: Closes all the open windows, if any. 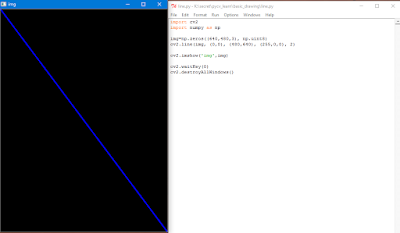 As you can see, we are now able to draw a line using simple operations.

That's all for this tutorial, and in next tutorial we are going to learn how to draw a circle.

Any queries, please ask in comments section below.
Posted by Unknown at 03:26:00 No comments:

In this tutorial we will see how to record a video from a camera. We can use laptop camera to do this. Here is the code:

Line 3 : This is the most important step as in this step we are providing the info about the codec of video we are going to make. It can be 'XVID', 'MJPG', 'DIVX'  and so on. We have defined it as 'XVID'. The function we use for this is cv2.VideoWriter_fourcc(*'<type of file>') where you can replace <type of file> with supported Codecs of Videos in OpenCV.

Line 4 : Now we need to specify what will the output i.e. captured video will look like. For this will create a VideoWriter object. This object takes as input the filename(eg. movie.avi) , the FOURCC code, fps(frames per second) i.e the speed of video(eg. 20), and the resolution of the video(eg. (320,160)).

Line 6 : Capturing a frame from camera and saving in frame.

Line 7 : As we discussed in one of the previous tutorials, ret is a boolean variable which contains True if frame is captured else False. This makes sense as we will only save a frame if it is available.

Line 8 : From this line onwards we start saving the video. As the name suggest, it write onto the file mentioned in "output" object.

Line 9 : Display the frame so that you can see whats been recorded. If you omit this line, you can still record video although you wont be able to see what is being recorded.

Line 10-11 : As discussed in previous tutorials, waitKey(40) will hold the whatever is on the screen for 40 millisecond and check whether "ESC"(27 is ASCII for ESC key) key is pressed. If the key is pressed we come out of loop(due to break) and the recording stops too.

Line 12-13 : Release the camera and close all windows using these two lines.

As you can see, I am playing a file which was created after I run the program.

So, that's it for this tutorial. Hope to see you again in my next tutorial which is going to be really interesting so do visit and like my facebook page to stay connected.

Any queries,  please ask in comments section below.
ThankYou

In this tutorial, you will learn to write a code in Python-OpenCV which can run a video file.
Let' see how to do this. Here is the code:

Line4: frame is captured from the camera and saved in frame variable.

Line9: cv2.destroyAllWindows() kills the active windows if any.

As you can see the video is playing after running the code. Note that you wont be able to hear the audio because OpenCV is a vision library and not an audio library. Its use is to manipulate the images,videos and not the sound. This tutorial just teaches you the basic things that you need to know about OpenCV and this feature is one of them.

That's it for this tutorial. See you in the next one where we are going to capture and save a video using a laptop camera.

Any queries please ask in comments.